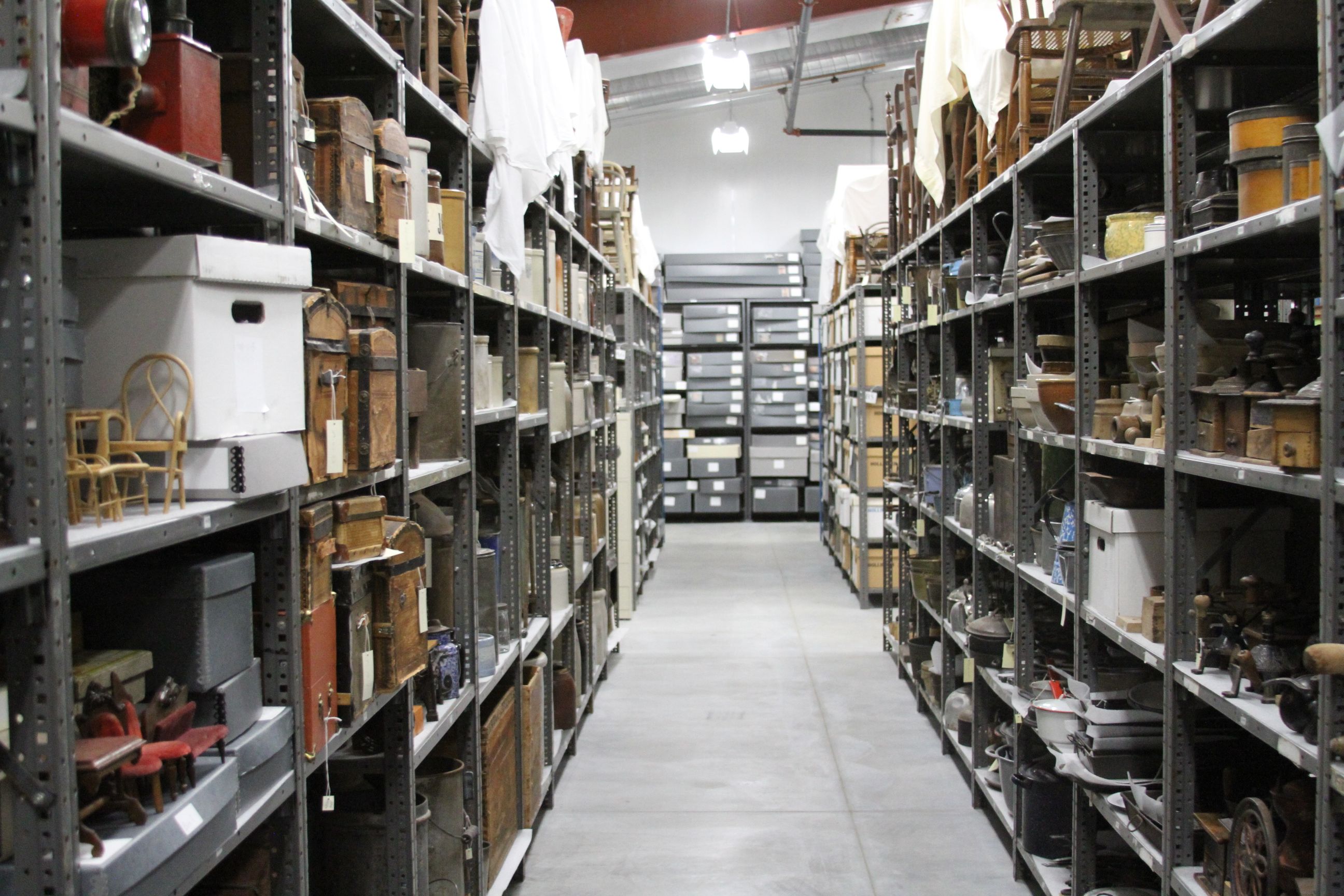 An Artifact A Day

This video series takes a deep dive in to Stuhr's collection and showcases some of our most fascinating artifacts. For more information on any of these artifacts, please call (308) 385-5316.

Bloodletting is a practice that has been used for thousands of years as a cure for several types of fever, migraines, and other ailments.   Physicians who practiced the technique believed that illness could be caused by an abundance of Plethora.  Plethora was an “overabundance of body humors.”  Humors included blood, and it was believed that when the body carried too much blood, it must be purged.  The solution would then be to bleed the body of certain amounts of blood depending on the ailment in question.  i

In order to remove blood from the body, special instruments were created in varying sizes and functions.  One such was a small pocket-sized tool that folded out into different sized blades.  Another was spring loaded for quick action. The fleam (bloodletting knife) would be used to cut into a vein and the wound would be blead over a measuring bowl.  If the illness persisted, more blood would be taken based on symptoms.

Modern day barber poles showing red stripes can be attributed to this practice.  Barbers often performed the procedures and, when finished, would wrap the bloodied rags around a pole outside their business.  iii

Though bloodletting was used for thousands of years, it has been scientifically proven to be harmful to the body.  Blood loss is great quantities has been linked to hemorrhagic shock, organ failure, loss of brain function, and death. ii

Modernly, bloodletting has mainly ceased to be used in the medical field, but for a few rare diseases.  There are, however, other techniques such as cupping that are supposed to draw blood to the surface of the skin, without removing it from the body.  This can be used to help with immune system function, muscle soreness, and muscle spasms.  There is, however, little scientific evidence to back up whether it works or not.

i. Bloodletting Instruments in the National Museum of History and Technology

iii. The Book of Wonders

Hamlin’s Wizard Oil was concocted in 1861 by brothers John and Lysander Hamlin.  The product was primarily peddled around the country as a cure-all medicine.  The brothers, along with a traveling performance troupe, advertised their product with quick witted acting, songs and dances.  Poster advertisements were also used to help sell Wizard Oil. One of these advertisements featured an elephant using the medicine.  The poster read, “Hamlin’s Wizard Oil cures all pain in man or beast.”  i

The ingredients within this substance, however, only contained varying amounts of alcohol, camphor, and other essential oils.  Although the medicine would have created a pleasant odor, the most it really accomplished for the user was a numbing sensation and drowsiness.  Furthermore, it did not have a scientific backing to its claims.

In modern times essential oils are still used for numbers of ailments and conditions such as, headaches, muscles spasms, allergies, and energy or relaxation.  Although scientific evidence is limited as to whether they have much effect on heath, they remain a part of many people’s health routines.

An Annotated Catalogue of the Edward C. Atwater Collection of ..., Volume 3

This wheel chair, most likely used by a child given it’s small size, was made and used during the mid 1920s. This chair has a strong wooden handle bolted on the back of it for pushing, and small wheels that cannot be reached when seated in the chair indicating that the person using this chair had limited mobility of both their arms and legs. Chairs like these would have been common for victims of the polio epidemic that swept the United States during the first half of the 20th century. Polio primarily affected children under the age of 5, but adults also contracted this disease as well.[i] Polio, which at times caused temporary or even permanent paralysis, led to thousands being paralyzed a year during this time. [ii]

This chair is made of wood, has small, metal wheels with rubber tires, and also folds flat, making it easily storable. The wheel chairs of today have a much more robust construction and can even be motorized to allow people with limited function of their arms to propel themselves without the need of assistance. The history of this wheel chair is largely unknown, but it’s existence has the ability to teach us about the adversity that people had to overcome during times of less technological advancement.

[i] Choudhry, Izzy. “The History of the Polio Vaccine: An Educational Resource by the College of Physicians of Philadelphia.” January 6th, 2020. https://historyofvaccines.blog/2020/01/06/the-history-of-the-polio-vaccine

This first object is called a Fraisse’s Emergency Medical Pocket. This container would have been used during World War 1 by medical personnel as a durable storage container to carry drugs in vial form that could be used in the field to alleviate pain. This container held up to 7 vials. Some of the common pain relievers of the time that were held in these containers were pure ether, adrenaline, morphine, and even caffeine which was believed at this time to alleviate pain as well.

The second object in this collection is a portable hypodermic syringe kit which would have been used during World War 1. It is secured inside of a case that resembles a cigarette lighter which made is easy to carry and also familiar to handle for the soldiers who used it. The top of the case reads  "Med. Dept. USA".  The case itself contains three glass vials of hypodermic tablets which would have been dissolved in water and then drawn into a syringe before being injected into the patient. There is also one hypodermic syringe in this case and one syringe cleaner.

The last item in this collection is a U.S. army dental kit which would have been used during the 1880s.  It includes three pairs of dental root forceps, and a pair of scissors. This kit is wrapped securely in a brown leather roll which would have made the case easy to pack up and carry during war time. While this leather roll was portable, it might not have been the most secure form of transport, as you can see that some of the leather loops are missing their dental instruments .

Compared to the first aid kits of the 21st century, it is clear to see just how far our society has advanced in the medical field in terms of our understanding of the human body and the necessities required to treat it during times of emergency.

Throughout the centuries, many items have claimed to rid the body, or certain areas of the body, of toxins, inflammation, or congestion.  One such item on the market in the 1880s, was the Kress & Owen brand nasal douche. This small glass object was used for types of inflammation, nasal congestion, and sore throat.

The Nasal Douche would be filled with diluted Glyco-Thymoline and poured through the nostril to the back of the throat.  The patient would then let the solution sit and in mouth for two minutes before spitting.  The Glyco-Thymoline was one of the first forms of mouth wash on the market, and was recommended by the company to be used “for diseases such as diphtheria, ophthalmia neonatorum, consumption, etc.” ii

One instance of use stated by Kress & Owen in an advertisement for their product, tells of a patient who was recovering from Typhoid Fever.  The article states that months after recovery, the patient developed a large amount of dark nasal discharge and itching in both nostrils that made breathing very difficult, as well as an enlargement of his left tonsil.  But with the first treatment using the Kress & Owens Nasal Douche, the congestion cleared up almost immediately and the continued use cleared up all signs of infection within weeks.  i

In an article stated in the Journal of American Medical Association, however, it is stated that, “A report of the Council on Pharmacy and Chemistry pointed out that this ‘patent medicine’ is simply a weak antiseptic, so feeble that even in full strength it does not kill Staphylococcus aureus in four hours and is of little, if any, greater therapeutic value than sterile salt solution.” ii

The Nasal Douche and the way that it is used, are not dissimilar to that of today’s neti pot, which uses a saline solution to flush the nasal passages of mucus and congestion.  Though in the case of using a neti pot, the solution is poured into one nostril and flows back out through the other nostril.  The FDA has even stated that the proper and safe use of neti pots can be helpful and effective. iii

The Vapo-Cresolene Vaporizer was used during the late 19th century as a nightly antiseptic treatment for a whole host of infirmities including colds, whooping cough, bronchitis, sore throat, pneumonia, asthma, hay fever, and even measles.”[i] This product used a thick liquid form of coal tar which, when vaporized over a small kerosene lamp, produced a vapor of this same substance. This vapor was actually hazardous to the health of people who used the vaporizer if a room was not sufficiently ventilated, but this did not stop the Vaporizer from gaining broad popularity.[ii] In fact this device was still in use until the 1950s despite it being discredited and deemed hazardous as early as 1908 by the collective medical community. [iii]

While today in the early 21st century, we might scoff at such a device gaining broad popular appeal, consider the products used in current everyday life to combat similar illnesses. Do products like Vicks VapoRub and other similar home treatment remedies really help us to recover from illnesses faster?

This instrument known as a Lebenswecker, which translates to “life awakener,” was used as a cure all homeopathic treatment for a whole host of illnesses including toothaches, whooping cough, measles, epilepsy, baldness, and even mental disorders.[i]

The Lebenswecker has several small needles at one end. The needles are dipped in a counterirritant ointment and then used to prick an individual on the opposite side of the body where they originally complained of pain or discomfort. The skin where the patient was pricked by the needles would then develop a rash, often with draining blisters. It was believed that any other harmful toxins in the body before this procedure was undertaken would leave the body after this procedure through the draining blisters. This treatment remained in use into the early 1900s.

While this may seem like a strange practice in the early 21st century, during the late 19th and early 20th century many people recorded positive testimonials about their experiences using the Lebenswecker and the instrument gained a great deal of popularity during this time. It is important to remember that while this instrument was widely discredited in the scientific community, many people still continued to use the lebenswecker for treatment after this realization.

Today in the early 21st century there are many treatments that are popular and claim to alleviate pain caused by different maladies, but do not have the backing of the scientific community. Ask yourself, in 100 years what will our ancestors think of our generation’s use of cupping treatment to alleviate problems associated with sore muscles, back and neck pain, migraines, knee arthritis, skin diseases, and high cholesterol?[iii] Or of how colloidal silver products are marketed as a cure all treatment for all sorts of illnesses in many of the same ways that the lebenswecker was marketed?[iv] What other treatments are out there that are popular that don’t necessarily have the backing of science?

[i] Lebenswecker, An Instrument Used in Homeopathic Medicine. Museum of Applied Arts and Sciences. https://collection.maas.museum/object/55398