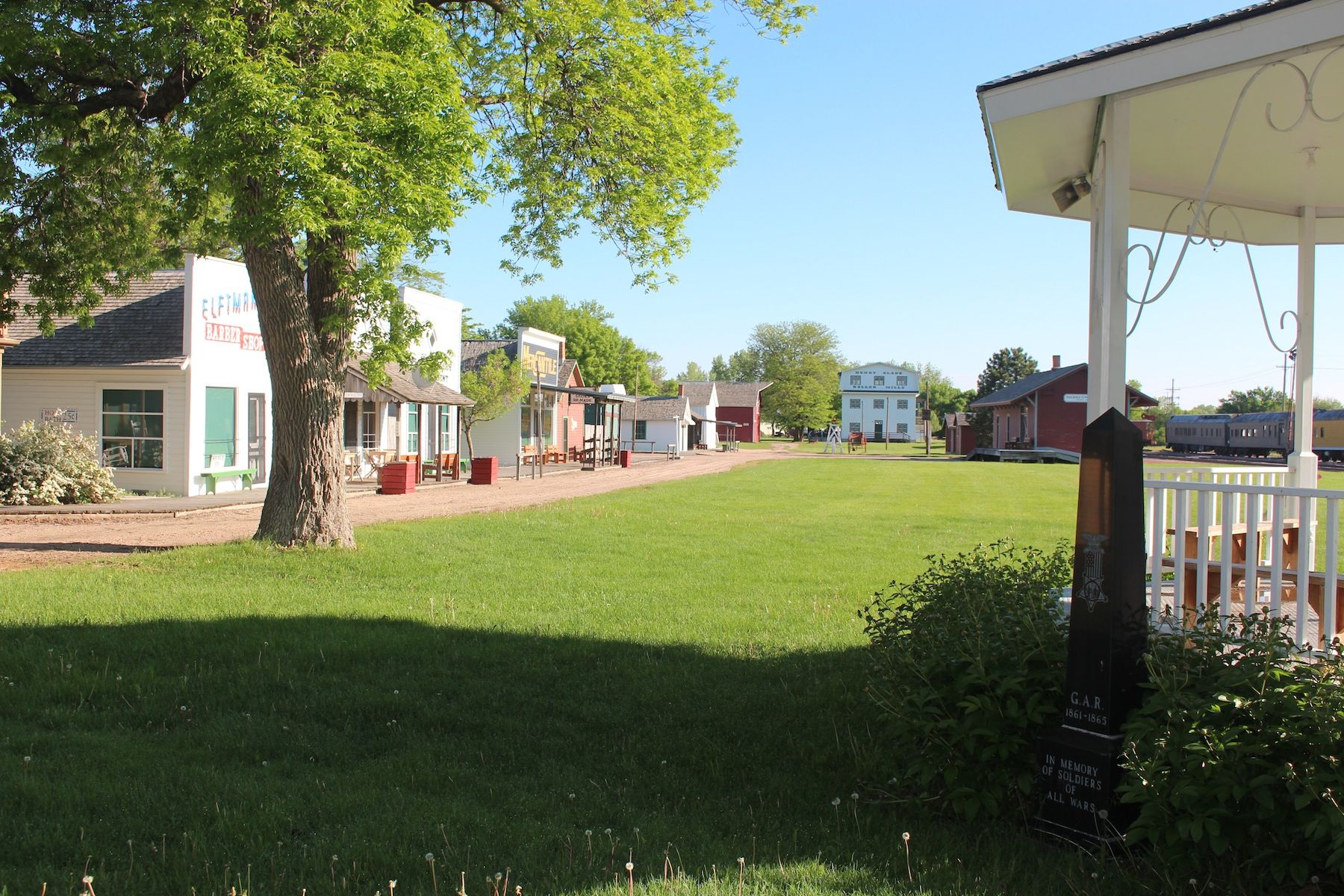 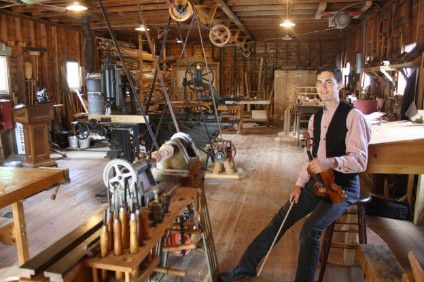 While we will not have daily programming in Railroad Town over the winter, one never knows what could pop up in the Stuhr Building, Fonner Rotunda or even occasionally in a site in Railroad Town!

In Railroad Town this year we looked at what was going on in the world both near and far during the year 1890.

In 1890, it is time once again for the decennial census. The census of the United States first began in 1790 as required by the United States constitution. Article 1, Section 2. “Representatives and direct Taxes shall be apportioned among several States which will be included in this Union, according to their respective Numbers….The actual Enumeration shall be made within three Years after the first Meeting of the Congress of the United States, and within every subsequent Term of Ten Years, in such Manner as they shall by Law direct.”   U.S. Marshals conducted each enumeration from 1790 to 1870. After this time, specially trained enumerators carried out each decennial enumeration since that time. Each census was unique in its questions – or lack thereof. From 1790 through 1840 the census just was concerned about the numbers. After that the name of each person was supposed to be recorded.  The unique factor of the 1890 census, which began on June 2nd of that year, is that this was the first census where a majority of states recorded populations over one million, along with several major cities. Another interesting aspect of this census is that it would be the very first to be tabulated by machine. Finally, this census announced that the frontier region of the US no longer existed and that the Census Bureau would no longer track the westward migration of the US population. Sadly, the unique information that was recorded in this census is no longer available, since the vast majority of it was destroyed when a fire broke out in the basement of the Commerce Building in Washington D. C. in 1921 where the records were being stored. The damage to these records led to the strong support for the creation of a permanent National Archives.

1890 would see the first Tournament of Roses, now known as the Rose Parade in Pasadena, the first female White House staffer – Alice Sanger, William Purvis received a patent for the fountain pen and Pope Leo XIII published Sapientiae Christianae. Eleven million acres of land were ceded to the US by the Sioux then opened to settlement, Ellis Island is designated as an immigration station, the Territory of Oklahoma is created by an act of Congress on May 2nd that redefined Indian held territory and created an area for settlers within those lands.

Two new states joined the union – Idaho on July 3rd and Wyoming on July 10th. Significantly, Wyoming territory had given women the right to vote in 1869 and was the first US territory and state to do so. The Weather Bureau was created in the Department of Agriculture by an Act of Congress, The Pan-American Union was created, and the Sherman Antitrust Act became law.  This legislation outlawed trusts – monopolies and cartels – in order to increase economic competitiveness and regulate interstate commerce.

The Sequoia and Yosemite National Parks were established by the federal government to conserve and protect native species of both animals and plants from hunters and timber interests, the fastest railroad tome for an American train was reported by reporter Nellie Bly for the Atchison, Topeka & Santa Fe run from LA Junta, CO to Chicago with an average speed of 78.1 mph., and the first Army – Navy football game was played at West Point, NY. Navy 24, Army 0.

A new dance – the two-step, became popular, thanks in part to the lively Sousa “Washington Post March,” replacing the older dances such as the galop, lancers, reel, quadrille, polka and Portland Fancy in popularity. Smoking by men became much more socially acceptable but was still considered taboo for women. Light comedic operas became popular, with the number one opera being Robin Hood. It contained two quite popular songs, “Brown October Ale” and “Oh Promise Me.” Emily Dickenson’s Poems was published, as were the following novels: A Hazard of New Fortunes, The Influence of Sea Power Upon History, Abraham Lincoln: A History (ten volumes!) and Black Beauty.

This is only a very small look at the year 1890. The citizens of Railroad Town hope that you will find time to stop by for a visit with us and perhaps learn more about the events and innovations of the year. As always, we will be looking forward to your visit!

Below is a map of Railroad Town, Nebr. that you can download and print. 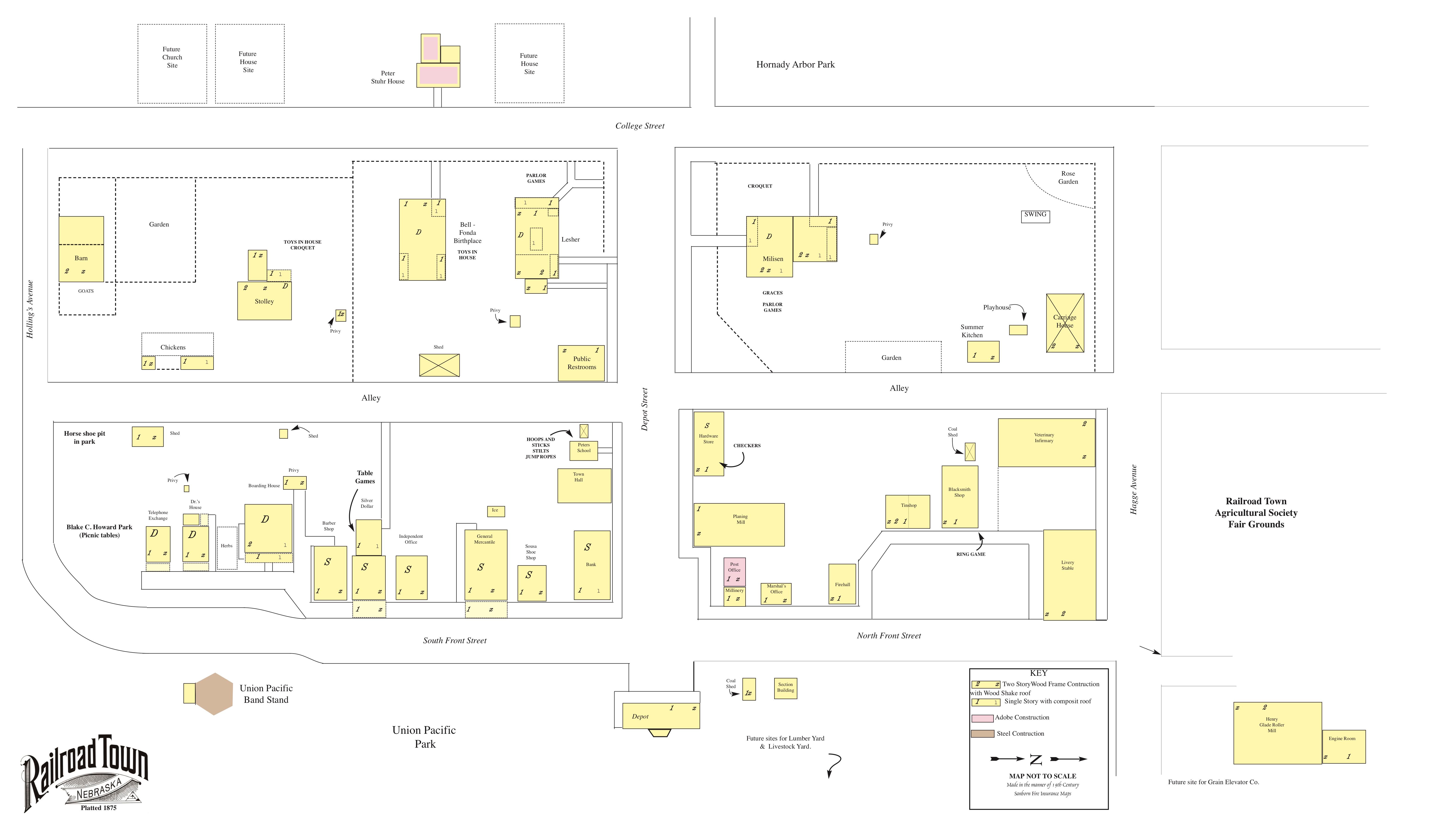