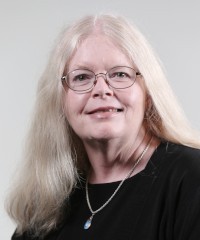 Sharon Harder began her career with the Stuhr Museum Foundation as Administrative Assistant in October, 2007 and was promoted to Operations Coordinator in July, 2015. Mrs. Harder completed her education in Missouri; moved to Nebraska to begin her work career in advertising at The Grand Island Independent; and later was a licensed insurance agent. She and her husband co-own Harold’s Upholstery Shop. Sharon also serves on the Salvation Army Advisory Board.

Sharon wears many hats, and welcomes the opportunity to greet guests as they visit the Edgar and Frances Reynolds Administration Building. Stop by and visit soon!